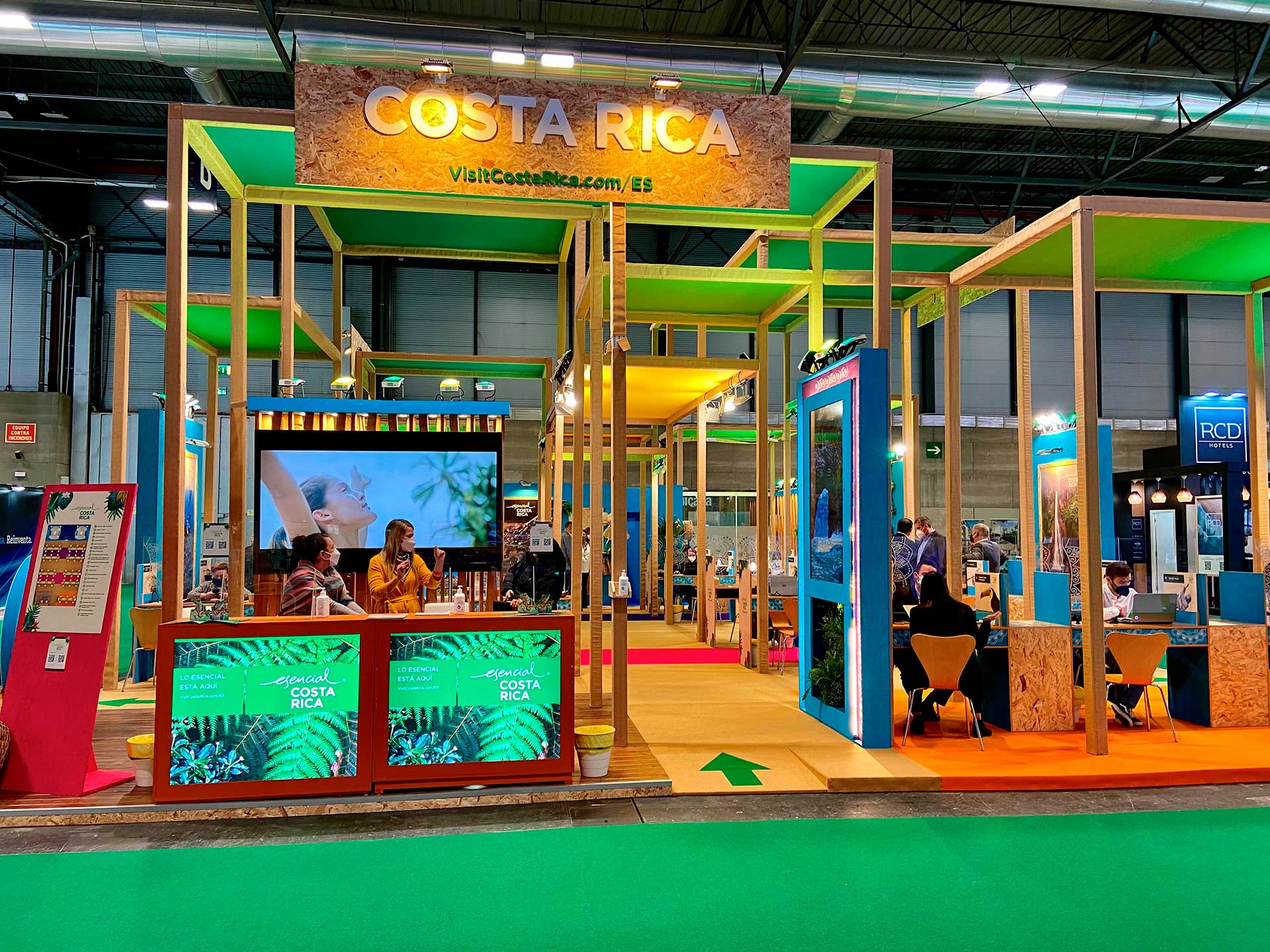 Spain Spain stands out as the leading European tourist issuer to the country of Pura Vida. From January to December 2021, 1.347.055 tourists visited the country by all routes, of which 94% (1.270.483) arrived by air. The United States continues to be the most important market with 852.182 visitors, while the main European source markets were Spain, with 39.618; Germany, with 31.739; and France, with 30.129. Spain has positioned itself as the leading European outbound market and second at the international level only behind the United States.

With these annual figures, the country has reached the initial goal of receiving between 1 million and 1.2 million tourists, thanks to the Road Map that has allowed it to recover to date more than 50% of international tourism by air.

Costa Rica has been one of the few countries in the world fully open in times of pandemic, where no negative PCR test or quarantine is required for entry, with no detrimental effects on the public health of the country or foreign visitors, but very positive for tourism recovery and social welfare.

In addition, within the framework of Fitur 2022, the Costa Rican Ministry of Tourism has renewed an agreement with Iberia to continue promoting the country and improve connectivity with the more than 90 destinations that the airline offers in Spain and Europe. Iberia currently flies to Costa Rica with six weekly frequencies -until March-, hoping to be able to recover as soon as possible the daily flight it offered before the pandemic. Also, next June will mark the 49th anniversary of Iberia’s first flight to Costa Rica, a destination that was also the first in Central America to link it with a direct flight.

The success of this recovery lies in the clear positioning of the country as the “sustainable tourism sanctuary” destination par excellence, since, in addition to grouping more than 6.5% of the world’s biodiversity and having 26% of protected areas, it continues to implement measures of extended sustainability and social progress in tourism.

In the words of the new Minister of Tourism Mr. Gustavo Alvarado, who is attending the international fair for the first time: “Despite the situation of the sixth omicron wave, Costa Rica is loyal to the Spanish market and draws a positive balance of its attendance to this new edition of Fitur with an outstanding representation of 25 private sector companies backed by a continuous growth in international visits, especially from Spaniards, since we opened borders in August 2020. Our commitment to a “sanctuary” destination model with a hospitable and sustainable tourism development, without crowds, with outdoor activities, which can be visited all year round, will continue to contribute to Costa Rica’s strengthening with a prompt full recovery of our industry”.

Thus, it is configured as a leading tourist destination in the world in terms of ecotourism, sports & adventure, wellness, multiculturalism, traditions, gastronomy and sustainable luxury, with extensive air connectivity at European level and with the safety of tourists guaranteed with the compliance of all Covid standards. In addition, these annual figures reinforce its innovative, sustainable, and inclusive tourism model, in favor of local development that will continue in 2022.

During the fair, merchandising elements and spectacular marketing actions carried out by the agency during the months of December 2021 and January 2022, designed to be used during the fair, were shown.

The first of these consisted of a surprise box with the fauna, flora and sounds of Costa Rica. It was used as a New Year’s greeting to more than 390 professionals from the Spanish tourism sector. When opening the box, a scenario appears formed by several layers of graphic cardboard simulating the flora and fauna of Costa Rica in 3D and which included a QR code that directs to the website of puravidauniversity, also has an audio in which when you open it starts an audio playback with the greeting and a mix of sounds of the jungle that was recorded by the DJ in the action of sounds of Costa Rica last year. This box was handed out to the media visits. 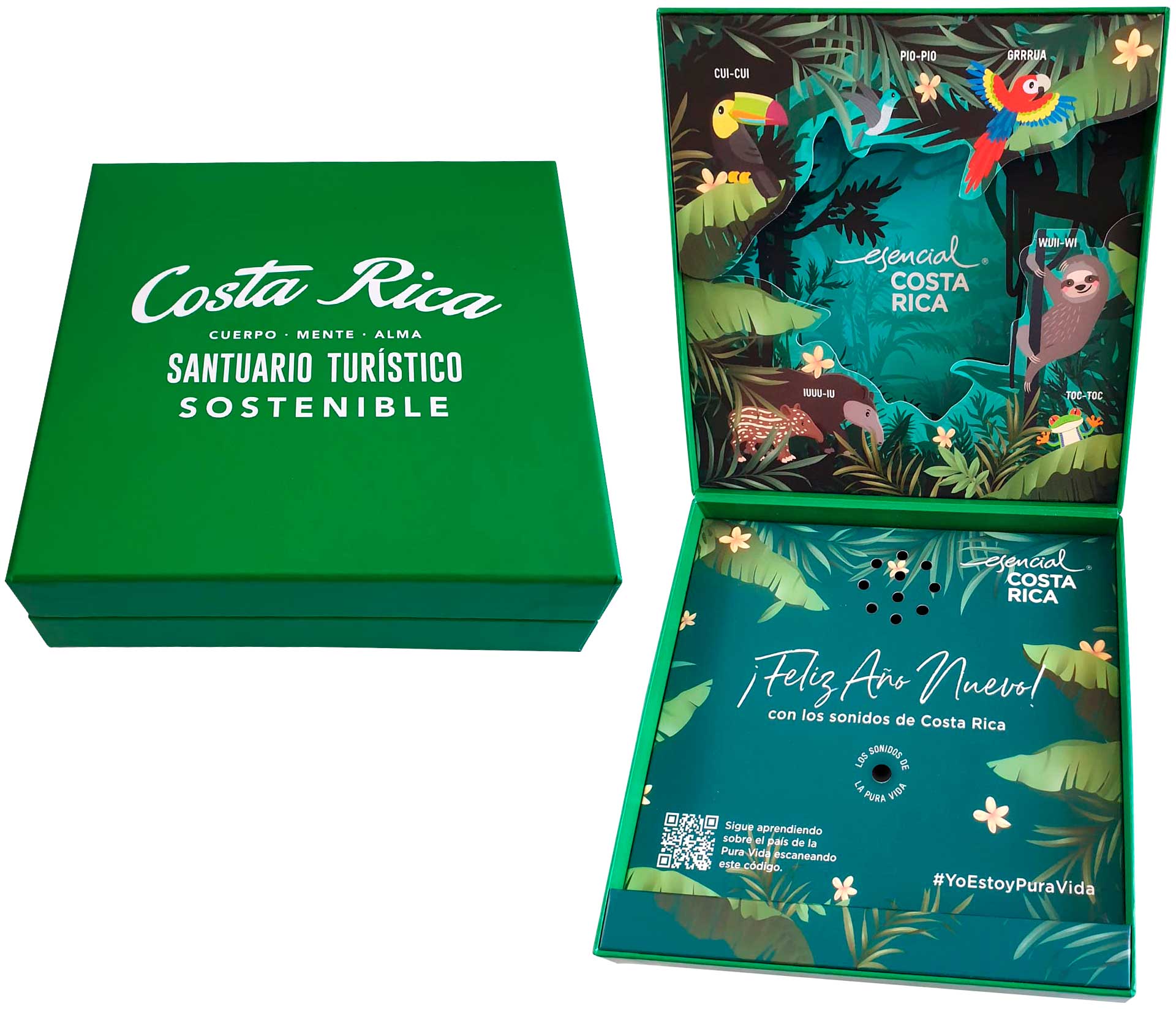 Cover of Agenttravel magazine
This action consisted of customizing the cover of the February printed magazine by means of a “cover shirt”, i.e. a fake cover, which has allowed us to have four personalized sides with the image of Costa Rica in the printed magazine distributed during the fair. This action has allowed a high visualization by the professionals who visited the fair and the Costa Rica stand of Costa Rica’s spectacular marketing actions during the fair. 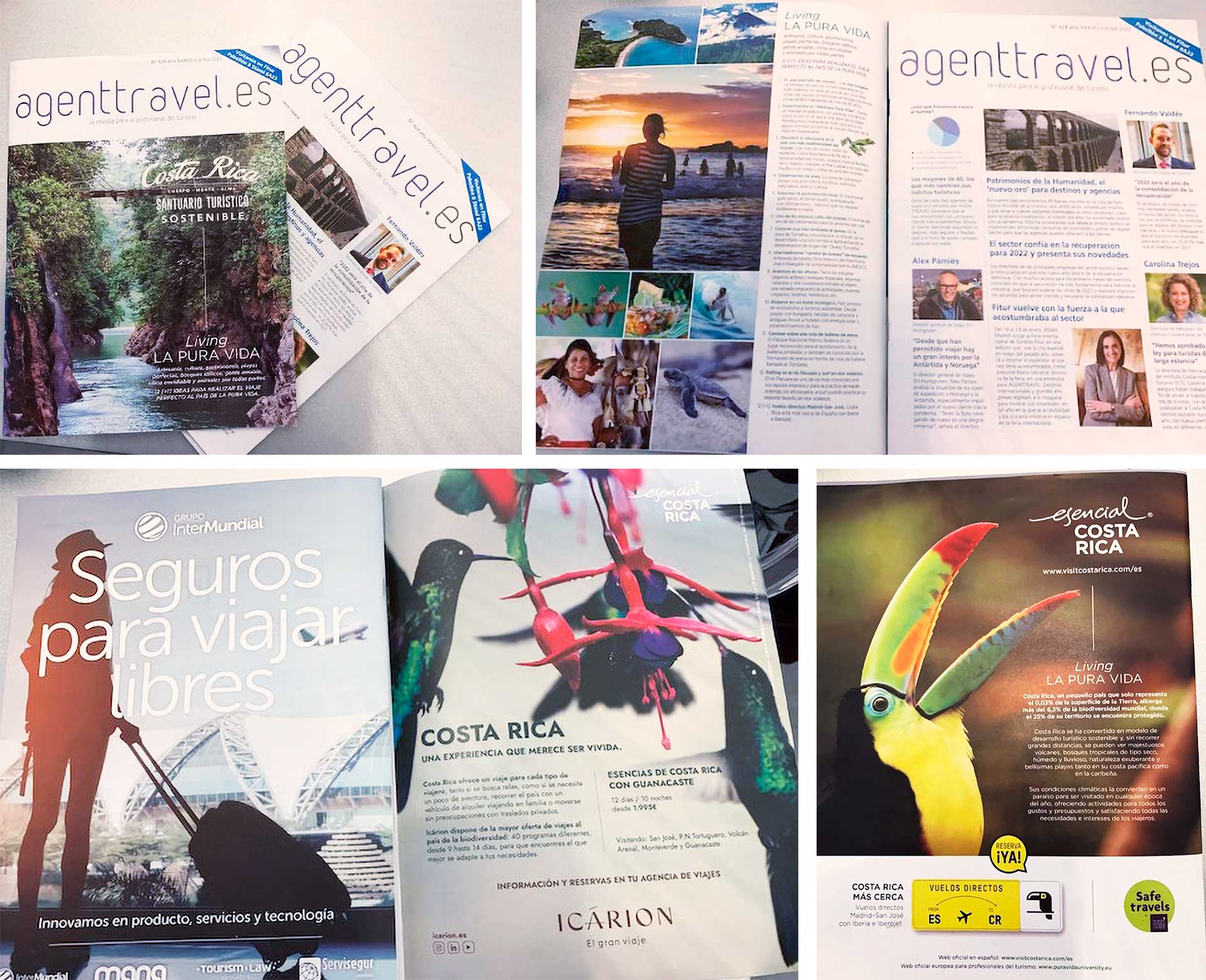 Creative Fold-out in Viajar magazine
An insert was created in the January issue of Viajar magazine, which went on sale at newsstands at the end of December and was distributed both at newsstands and at Fitur to the public at the fair. This pop up insert made in collaboration with Viajes El Corte Inglés, located in the central pages of the magazine, when opened, displays a pop up with four removable tabs with offers, a special discount and advance sale, so that the reader, once these tabs have been removed, can go to a travel agency with them and book the advertised trip to Costa Rica, under special conditions, or by means of a Bidi code that redirects to the Costa Rica product of Viajes El Corte Inglés.. These tabs have on the front side the image of Viajes El Corte Inglés and the information of the trips offered, and on the back side the code for the redirection to the website. In addition, an extra print run of 2.000 copies was made and distributed at the fair, both at the Viajar booth and at the Costa Rica pavilion. 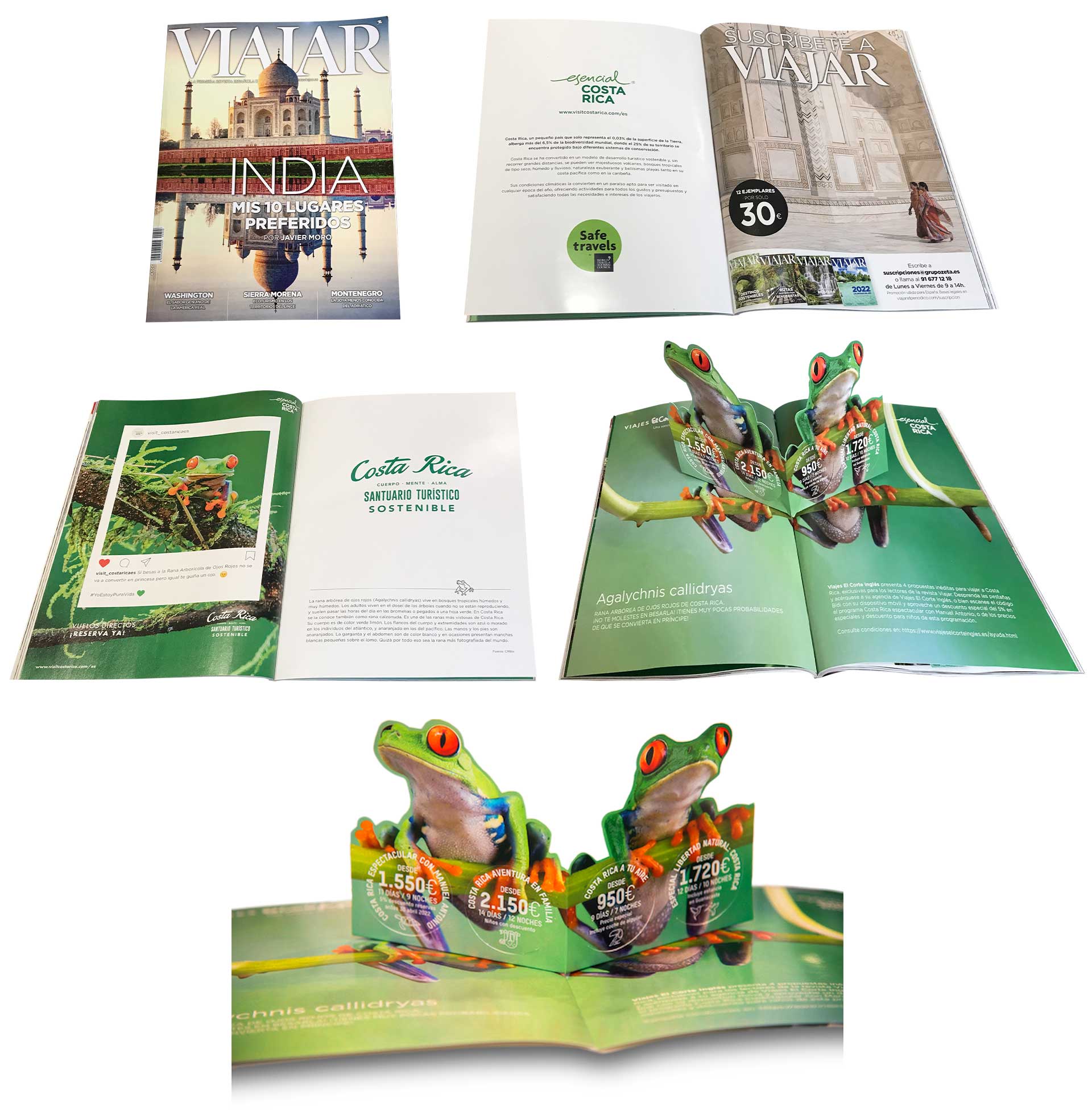